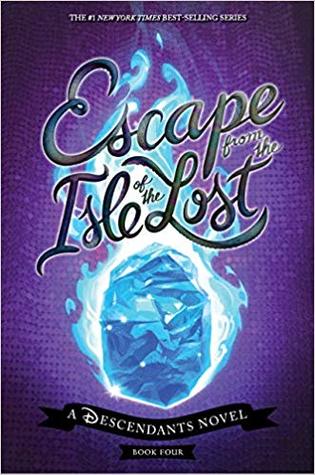 This was on my TBR ever since it came out in June. Because of Cameron’s death I feel like I should have read this sooner than what I did.

Synopsis: Mal, Evie, Jay, and Carlos may have once been the baddest of the bad, but their wicked ways are (mostly) behind them-and now graduation is almost here! But before the seniors can don their custom-designed caps and gowns, courtesy of Evie, they’ve got an epic plan to put into action. There are tons of villain kids on the Isle of the Lost who are eager for their chance to come to Auradon Prep-even Celia, Dr. Facilier’s trickster daughter, wants in on the deal!-and Mal’s crew is using their upcoming visit to the Isle to help make it happen. But Auradon’s biggest threat is still at large?

Trapped on the other side of the barrier, Uma is more desperate than ever to get her long-awaited revenge against Mal. When she discovers an underground lair belonging to Hades, god of the underworld, Uma realizes she’s found the perfect partner in crime. Together, they can defeat Mal, bring down the barrier, and escape the Isle for good.

Mal and Uma have a score to settle, and they’ll come face to face in an explosive underwater battle that could determine the fates of Auradon and the Isle of the Lost once and for all.

Review/Thoughts: I love Descendants. The movies, and books. The books have always filled in the gaps between the movies, and I really enjoyed that! You get a bigger view of everything, and you learn about all these characters and places that you don’t get to see in the movies.

This book takes place right between movies 2 and 3. It sheds light on what Uma has been up to since we last say her at the end of D2. Hades and Celia get a lot of time in this book and that’s okay. It’s setting them up, allowing us to get to know they a bit before D3 starts. And we also get to see how VK Day came about.

One thing that I really enjoyed was the names used for the Colleges. Agrabah State University, Magical Institute Training and, my personal favorite, Sherwood Forest University.  It’s brilliant! I loved all these references.

That being said, this is not my favorite Descendants book. I felt like this one lacked. All the rest I enjoyed so much and would reread them if given the choice, but this one I’m not to excited to reread. It just felt dull to me.

Do I think there will be another movie? I don’t have much hope that there will be, especially after Cameron’s death, R.I.P. I do hope they do another book that takes place after D3. If Melissa doesn’t, I understand, but I wouldn’t mind a book on what life would be like after D3, maybe a wedding? Again, if it doesn’t happen I can see why.