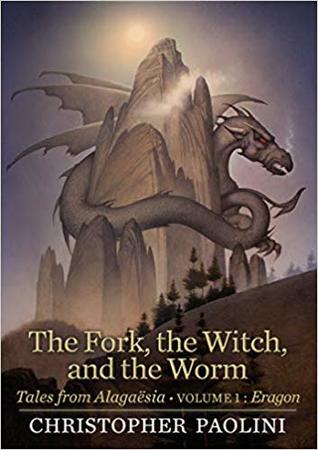 Ah, the world of Alagaësia. My how I missed Eragon and Saphira….and Murtagh. (I might talk about him a lot.😂)

Synopsis: Welcome back to the world of Alagaësia. It’s been a year since Eragon departed Alagaësia in search of the perfect home to train a new generation of Dragon Riders. Now he is struggling with an endless sea of tasks: constructing a vast dragonhold, wrangling with suppliers, guarding dragon eggs, and dealing with belligerent Urgals and haughty elves. Then a vision from the Eldunarí, unexpected visitors, and an exciting Urgal legend offer a much-needed distraction and a new perspective.

This volume features three original stories set in Alagaësia, interspersed with scenes from Eragon’s own unfolding adventure. Included is an excerpt from the memoir of the unforgettable witch and fortune-teller Angela the herbalist . . . penned by Angela Paolini, the inspiration for the character, herself! Relish the incomparable imagination of Christopher Paolini in this thrilling new collection of stories based in the world of the Inheritance Cycle.

Review/Thoughts: This books starts right where Inheritance (book 4) left off. No, Eragon’s not flying off into the horizon. He’s found an island for the future generations of dragon riders, and he’s hard at work making it livable. This is where our story starts.

The main reason I wanted to read this book was, yes I wanted to see what happened after the events of Inheritance, but I also wanted to see what had become of Murtagh. Murtagh was and still is my favorite character in the series!!!! Yes, he worked for the bad guy and all that but he’s still my favorite. (I was relieved I didn’t have to read long to find out what happened to Murtagh and his dragon, Thorn.)  Eragon and Saphira are the main characters, and Brom was just the best, but for me, Murtagh stole the show. He was such an interesting character, hard to read at times, and really intriguing to me. So, I was really excited to see where he was in this book…as well as how Eragon fared in his quest with the dragons.

This book felt like a few short stories were written and then shoved together. If you read the Afterward you’ll realize that’s pretty much sums what this book is, short stories that were rewritten so they blended together. I know the synopsis says ” three original stories” but still I had hoped for something a little bit more, but that’s okay it wasn’t a total flop. It was still a great book to read, and I enjoyed every minute…even if there was a lull in the story. And even if it is shorted and thinner than The Inheritance Cycle series.

My favorite part out of the entire book is defiantly part 1. It was the most interesting for me and it held my attention the best. It ended all to soon for me. I needed more! My least favorite was part 3. It seemed to drag on and on for me. I couldn’t get to the end fast enough. I was ready for something else almost as soon as it started.

“Sometimes, you have to stand and fight. Sometimes running away isn’t an option.” -Tornac, page 65

When Tornac got introduced I was getting all giddy inside, and the more Tornac talked the more I sat there thinking, “That’s not your name, is it pal?” Don’t get me wrong, I loved how gentle and patient Tornac was with the girl. He was so kind and willing to listen to her story. He truly wanted to help, and that warmed my heart. His calm composure was everything! But I knew who was under that hood of his cloak. I wanted to scream and jump up an down when he stepped out of the tavern. I just wished we could have seem more of him in this book. His quest intrigued me.

Will I read this book again? There’s a chance, but I’d only to be reading it again cause of part 1 since that was the best. Am I disappointed I read it? A little, if I’m being honest. This book wasn’t what I had expected it to be, that’s why I’m slightly disappointed, but I wouldn’t take back having read it.

~Till the next chapter~